Homily at the Funeral of Archpriest John Comanescu, Bishop James of Sonora 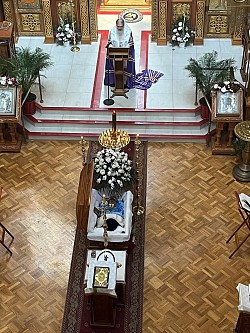 Homily Given at the Funeral of Fr. Ioan Comanescu
By the Right Rev. Bishop James of Sonora
At the Holy Virgin Cathedral  -  San Francisco, California
January 22, 2022

“My zeal hath consumed me, because mine enemies have forgotten thy words.” (Ps. 119: 139). These words of the Prophet and King David in Psalm 119 capture the essence of the fervent, Christ-loving spirit of the newly-reposed Archpriest Ioan Comanescu. He deeply loved Our Lord and served His Church with a profound and unfailing dedication. His many years of service in Priestly labors have now, by the will of God, drawn to a close, and he may look unto the Lord in the Heavens from Whom came his help on earth, and from Whom will now come his reward in all Eternity.

Behold! The awe-inspiring word: Eternity. Death confronts us as the seeming end of all things and would have us forget that Christ has conquered it through His Resurrection. Death would have us forget that we were always meant for Eternity, created as God’s image and likeness, and destined to become by Grace what God is by His very nature. Death would have us filled only with sorrow, as though Heaven is to be found in this life, when, in truth, we shall all one day pass through the portal of death and leave earthly life, which will then appear as a “shadow and a dream” as it says in the Ikos of the Canon of the Memorial Service for the Departed.

King David also prays: “Lord, grant me to know the number of my days, that I may prepare mine end, that I may know how frail I am.” (Ps. 39:4) The final chapter in Father Ioan’s earthly sojourn indeed presented him with a prolonged test of his patience and long-suffering. But we know from the words of the Holy Apostle Paul that “the sufferings of this world are not worthy to be compared with the glory that will be revealed to us” in Heaven. (Rom 8:18) Father endured this trial of illness to the very end, and through it he was purified “as gold tried by fire.” (1 Pet. 1:7) What joyful tidings are brought to us when we remember that he received Holy Communion twice—on Sunday and Monday, respectively—just prior to his falling asleep very early in the morning on Wednesday, the Day of the Lord’s Holy Theophany.

That he was vouchsafed to receive the Holy Mysteries with such timing is a signal mark of God’s mercy to him; and his repose on the Feast of Our Lord’s Holy Baptism is itself a sign of God’s favor. As it says in the service of the Forefeast of the Theophany: “Leap up, O River Jordan, and receive thou the Master Who cometh to be baptized! Rejoice, O Adam, with our first mother! Hide not yourselves as ye did before in Paradise; for He that beheld you naked hath appeared, that He may clothe you in your primal raiment. Christ hath appeared, desiring to make all Creation new”. Father Ioan may now look forward to a new raiment, more glorious than the priestly robes he wore in the service of the Lord, and no longer vulnerable to illness and death, but filled instead with God’s glory and grace.

Now that the first part of Father’s life has drawn to a close, the second part of life—that is, in life everlasting—begins, and to this part, we hear the Holy Scripture declare: “Thou art a Priest forever, according to the order of Melchizedek." (Ps. 110:4) Is it possible for us to peer into this very Priestly service in life everlasting, to which our honorable father may now look forward, after having served the Church and its faithful with such earnestness and distinction on earth?

In the 4th century, Saint Niphon of Constantia was given a vision of the Last Judgment. It is an astonishing and arresting vision to read, laying out in great detail the events we are all destined on the final day in earthly history to experience. (Providentially, it is readily available on the Internet for anyone who would choose to read it. Father Ioan would no doubt encourage each of us to carefully read it and to honestly evaluate whether we would find ourselves on Christ’s right or left hand based on how we now live our lives.) In part, the vision says:

“When the Judgement was over, the King went toward His beautiful palace, together with all His Saints. Singing, they all went inside with the Lord Jesus Christ to the heavenly feast in the heavenly palace, and they were overwhelmed with joy. There came the ranks of Angels, the Apostles, and Martyrs. There followed the Hierarchs, Priests, and Deacons: all came before the Lord. They were repaid with eternal crowns also, according to their dedication, patience, and their works. Every crown was different from the other, like a star is different from another star.”

“Many of them were holier and honored more than the others, some of the Priests were honored even more than the Hierarchs. The Lord also gave each of them a Church, to serve God and have their services and the Liturgy of the Lord. Then came the Monks, the Prophets, and the Faithful. And they were waiting for those gifts that the eye has never seen and the ear has never heard of and by which the heart of man has never been touched.”

Further on in the Vision, St. Niphon declares: “As the sponge is soaking in the water, that’s how the saints would soak the Heavenly Holy Spirit of God, of the Father and of the Lord Jesus Christ, together for eternity. The first angelic army of heavens was asked to sing a never-ending hymn. They were all full of joy and honor. They started singing a beautiful hymn, more beautiful than anyone on Earth could ever hear. The hearts of the saints were touched and full of unspeakable joy.”

“Then the Seraphim started a wonderful chant to the Glory of the Father, the sweetest hymn that ever existed in heavens. One by one, all the heavenly armies started singing hymns that were unutterably beautiful and beyond all imagination. They were always singing a different hymn, so different and more beautiful every time.”

“When the seven circles of Powers completed their glorious hymns, the archangels started the thrice-holy hymn: Michael started and then Gabriel answered, then Raphael and Uriel answered, all in extraordinary harmony. Then all the saints started a glorious hymn, honoring God The Creator. The hymns were glorious and you could hear them everywhere.”

One can almost hear Father Ioan exhorting us: “Do not look at me, now that my time here has drawn to a close and you see only the remains of my mortal body; rather, look only to the Lord, behold His holy and eternal countenance, and strive to make every moment of the time that remains in your life a preparation to come before the Lord one day, as I am on my way to doing now. As my Patron Saint, St. John the Baptist, says, quoting Isaiah the Prophet, as we hear in this very Feast of the Lord’s Theophany which we are continuing to celebrate: ‘Prepare ye the way of the Lord, make straight his paths’—that is, the path to your hearts—and make them straight—that is, by repentance, for truly ‘the Kingdom of God is at hand.’(Mark 1:15)”

We all want “the best” for our loved ones. Father Ioan most certainly wanted the best for everyone—his family, parishioners and friends, and all whom he served with such dedication. In our Faith, we do indeed have “the best” in everything: in art—what can compare with an Icon, that window into heaven?; in aromatics—our most fragrant incense calls us to the practice of fragrant virtue; in taste, wherein through Holy Communion we taste of the very Fountain of Immortality; in the sound of our heavenly church music and hymnology—in which the angelic choirs resound on earth; and in the tactile sense, through which our Sign Language conveys the glory of the Cross and the revelation of the All-Holy Trinity. And certainly, Father Ioan as an architect would cite our beautiful church architecture as being “the best” of all architectural forms, creating for us a heavenly, sacred space, where we encounter God in a holy and revealed way.

And so we ask: what could we, in turn, wish as “the best” now for Fr. Ioan? The title of a book by St. Sophrony of Essex gives the answer: “We Shall See Him Face To Face.” Would we not wish, even beyond any other experience on this earth, including that he could remain with us longer in our own brief lifetime, that our beloved Father will forever behold the face of Our Lord Jesus Christ, joining the ranks of Angels and Saints and Righteous Ones in the unending joy in Heaven that was revealed to St. Niphon?

And further, should we not draw from Father’s truly Christian translation into Eternity the renewal of our desire to live in such a way that this will also one day be our own destiny? Father Ioan would surely say that this would be “the best” for us before our final day arrives. How greatly would he rejoice to see us now heeding the call of the Baptist to repent—by reading the Lives of the Saints, praying consistently, and attending church as often as possible, so that one day we may be forever clothed with the “the best” raiment: that Grace of the Holy Spirit with which we were once clothed in Paradise and will be clothed once again in the Kingdom of Heaven.

Many years ago, two hierarchs signed a guest register. The senior of them wrote, below his name, this short phrase: “The best will do.” The other of them then signed his name, and below it he wrote:

The best will do
If best it be.
What is the best:
Can you define?
Others think best
What do you think worst?
Which shall prevail:
Your best or mine?
If thus our views
Of what is best
Do ever change
A voice Divine
The real best to us declares:
God is the best
Your best and mine.

May God grant our beloved Fr. Ioan rest with the Saints and Angels in the Kingdom of the All-Holy Trinity: the Father, Son and Holy Spirit, to Whom be glory honor and dominion forever. Amen.

Photographs from the Funeral of Archpriest Ioan Comanescu