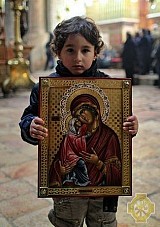 With the blessing of His Eminence Archbishop Kyrill a special petition for the well-being of persecuted Orthodox Christians is to be raised up throughout the Western American Diocese.

The petition, composed by His Eminence Archbishop Mark of Berlin and Germany, is a supplication to our Lord God that He would protect the Holy City of Jerusalem, the land of Kosovo-Metohija, Syria, other places throughout the Near East, and in the Ukrainian lands; that all His faithful children, their holy places and homes may be preserved from harm and destruction.

This prayer is inserted into the Augmented Litany at the Divine Liturgy.