Priest Christopher Horsley has been serving in the Western American Diocese for 19 years.

In August 1996, he was ordained to the diaconate and appointed to serve at the Holy Resurrection Russian Orthodox Church in Santa Barbara, CA. However, he only served there for a few months and was soon transferred to the Holy Transfiguration Russian Orthodox Cathedral in Los Angeles, CA, where he served as deacon for eight years.

In December 2004, Father Christopher was ordained to the priesthood and continued to serve at Holy Transfiguration Russian Orthodox Cathedral for the next eleven years. Having learned Church Slavonic, he has been able to assist the Very Reverend Archpriest Alexander Lebedeff in conducting all of the church services. Father Christopher had always hoped and prayed for an opportunity to help others come to our holy faith and he feels that by God's grace his prayers have been answered.

Recently, His Eminence Archbishop Kyrill assigned Father Christopher to serve the English mission at the Protection of the Holy Virgin Russian Orthodox Church in Hollywood, CA. Below is a photo report of father’s first day there, November 1, 2015.

While leaving the parish and the faithful of Holy Transfiguration Cathedral where he has served for 19 years is very difficult for father, he is very excited with this new assignment. The mission at Holy Protection Church is thriving and the parishioners are full of love for God and His Holy Church. This assignment is also very special for him since he was ordained to the diaconate there. Father Christopher’s wife is Matushka Natalie. They have three children: Jonathan (19), Jeremy (17) and Jessica (13).

Father Christopher’s expressed the wish that God would grant him to be a good shepherd to this new flock. 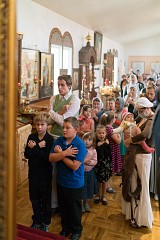 Photo Report on Archpriest Christopher Horsley's First Day at the Protection of the Holy Virgin Church in Hollywood, CA - 11/01/2015