A Reflection on the Lenten Pastoral Retreat of the Western American Diocese, Day 3, March 11, 2015

“Reprove not a scorner, lest he hate thee: rebuke a wise man, and he will love thee” (Proverbs 9:8).

There was great inspiration and a deepening of faith that accompanied the conclusion of our pastoral retreat, which took place from Monday March 9 to Wednesday March 11. We clergy took some of both home with us to our respective families and flocks.

Weighty matters were covered both through the topics of our lectures and in the discussion that ensued. Both lectures, “The Pastor in the Last Days” and “Homosexuality: Pastoral Challenges and Responses,” were of a high standard. It is an honor to be associated with such talented men from our diocese who so thoroughly researched their topics and delivered such excellent talks. But, even though one might think that these topics and the material of which they were comprised would be frightening and drive one to despair, no such attitude was found. Just the opposite occurred. There was a peaceful joy that reigned in the end. This demonstrates the positive work of the Church operating through its Divine Services which we participate in, the spiritual foundation we receive through the Holy Scriptures and the living tradition of an overall hopefulness, which has been handed down to us by our fathers before us. And all of this had come to be, thanks to the Spirit of our God.

Looking back on the first day of this retreat and reflecting on the opening words of our Archpastor, His Eminence Archbishop Kyrill noted that the Sacred Scriptures of the Bible are no longer counted as an authority for directing social thought and standards. We recall that His Eminence exhorted us, while not by any means abandoning the Holy Scriptures, to find ways to bring the message of the Orthodox Church to contemporary man.

Truly, contemporary society’s view of life and its opinion of what the absolutes that govern it should be have changed quickly and uncontrollably throughout the globe. The list of pastoral concerns is daunting for any priest: a general attack on the institution of the family, a cult of the flesh manifested in part by the proliferation of tattoos and body piercings, state promotion of same-sex marriages and transsexualism, ecological and financial calamity, civil wars and, among the rest, an advancement of a morbid fantasy of the “Zombie Apocalypse,” preparing minds for a real, future dystopia. And no matter how many scientific proofs or Sacred Canons we offer for the salvation of the world, we cannot stay this tsunami that is opposed to life and that is coming upon the Universe.

Or, can the Orthodox Church make a difference? Can we beat the enemy on his own turf? The answer, of course, is yes. Only we can’t defeat him on his terms, but on ours, or rather on God’s.

The underlying problem is found in pride and passion. This condition of soul is wreaking havoc in the world, that does not have a remedy for this phenomenon. The usual approach is to offer more “education.” Theoretically, if we educate the person he will turn around.

However, while not disparaging education, the Church knows that pride, passions, and addictions cannot be overcome by exclusively appealing to the rational side of man’s being. For example, one can demonstrate to a smoker with scientific perfection that he is destroying himself through his habit and he must quit. Yet he most likely will not stop on the basis of these proofs alone. Various reactions are elicited from him by the appeal to his rational mind ranging from open hatred to a phrase like: “I know it’s bad for me, but I like it.” Thus, most of mankind is living in contradiction to scientific proofs. And through our contradictions we are harming ourselves and this world in which we live.

So why is it that education, scientific testimony and rational thought are just as lost on contemporary man as the Holy Bible and the Sacred Canons have become? The answer is found in the largely unknown reality that man is made up of more than just a rational mind. The malady of pride has not just mastered his intellect. Simultaneously, it is deeply rooted in the other two powers of his tripartite soul: the appetitive and the irascible. In other words a man cannot be helped and cured of his addictions and passions, without addressing all three parts of his soul: his mind, his heart and his will. Further, it is the humility of Christ that heals the wounds within.

When God figures in one’s life, the passions are corrected and the soul finds rest. He figures in the life of a person through His revelation. And notably,  He often chooses to reveal Himself through our fellow men, who exhibit the humility of Christ. This humility addresses the three powers of the soul and heals the pride within.

Who can witness to God in the world? Through whom is God often revealed? It is through His martyrs and confessors. Orthodox Christians really make a difference in this world. They offer as a sacrifice to God all the powers of their soul, all of their thoughts, all of their desires, and all of their will. They express this by fulfilling Christ’s Commandments. The outcome is found in the embodiment of the virtues exposed in social situations, virtues like patience, meekness, goodness, chastity, temperance, faith, and hope… It is impossible to be such a person without the presence of God within.

Persistence in goodness and love, displayed by the confessor, is astonishing for the unbeliever. He realizes that only the power of God could accomplish such feats in a man. Thus, through the faith of the confessor and the presence of the Comforter pouring through him into the world, God is revealed in glory. “He that believeth on me, as the scripture hath said, out of his belly shall flow rivers of living water” (John 7:38).

A prime example of how one person can make a difference in the world is exhibited in the martyrdom of the Holy Great-martyr Marina. An apparently frail teenage girl of 15 withstood terrible torments and converted 3000 on-lookers in the stadium through the witness of her love for Christ.

One could respond that he is neither a great martyr nor any kind of Saint. So, how does this apply? The answer is very simple. He who has repentance is motivated to practice virtue both out offear of God and love for Him. Repentance, a broken heart, and gratitude towards God bring grace to a man’s life and through him to the world around him. “I am made all things to all men, that I might by all means save some” (I Cor. 9:22).

We offer many thanks to our hosts at the Old Cathedral, Hieromonk James and all of his helpers. Your hospitality was generous and your smiling faces were a consolation. 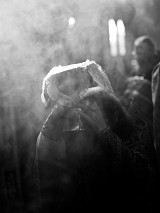