The Elevation of the Honorable Cross Marks the Completion of a Capital Remodel, St Seraphim of Sarov Church, Boise, Idaho

In June of this year the parish of St Seraphim began a building project to raise the roof of its church.  This project was expected to take 8-10 weeks. However, after removing the old roof, we found that the walls needed to be replaced as well. This situation resulted in the reconstruction of nearly the entire building.  Finally 5 months later, as we near the completion of our construction, we were able to bless the cross and raise it to the top of the new roof.

On Sunday November 10th, 2019, His Eminence Archbishop Kyrill of San Francisco and Western America came to our parish and following the hierarchical Divine Liturgy on Sunday led a procession out to the parking lot where the cross and refurbished dome were prepared.  His Eminence blessed the cross. And then, with the singing of "O Lord save Thy people," the cross was lifted by a crane into the air and brought to rest on the top of the roof as a crown rests upon the head of a newly crowned king.  This event marked the end of a long and difficult summer for the parish and was met with great joy by all the people. 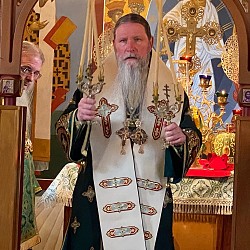