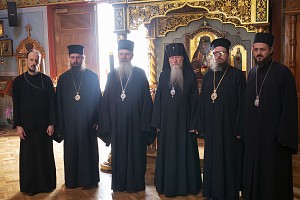 On August 28, 2019, the Feast of the Dormition of the Most Holy Theotokos, His Eminence KYRILL Archbishop of San Francisco and Western America received in His Cathedral dedicated to the Icon of the Mother of God “Joy of All Who Sorrow” five bishops of the Serbian Orthodox Church, who are presently visiting the Diocese of Western America in conjunction with the celebration of the 800th Anniversary of the Autocephaly of the Serbian Orthodox Church.

Despite the fact that it was a weekday, the cathedral was well attended by guests and parishioners. The archbishop’s choir had a full complement of singers, who solemnly praised the Most-Pure Mother of God and Her Dormition.

Bishop Teodosije, senior by ordination among the guest bishops, has been the Abbot of Visoki Decani Monastery, which is located in the much-suffering land of Kosovo, since October 22, 1992. Under his spiritual leadership, the sacred monastery has grown in number and strength in the face of open persecution in Kosovo. Visoki Decani has been known for offering humanitarian aid to Serbian Orthodox refugees and to all peoples who found themselves in trial and need in that region.

The other three guest bishops, Vladyka Sergije, Vladyka Dimitrije, and Vladyka David are representative of the younger generation within the Episcopal Council of the Serbian Orthodox Church. Bearers of the monastic spirit, these bishops traveled out to California, the “distant Diaspora” of the Serbian Orthodox Church. The concelebration of the Divine Liturgy at Holy Virgin Cathedral has become the fulfillment of a prayer; a precious event that Their Graces will keep in their hearts. The cathedral is where the honorable relics of Saint John (Maximovich) the Wonderworker repose, and it should be noted that Saint John lived in Yugoslavia and taught in the seminary in Bitola. Our brothers in Christ remember this aspect of Saint John’s life, and Their Graces will carry their impressions to their respective flocks upon return to their Homeland.

These bishops of the Serbian Orthodox Church have come to the West Coast primarily at the invitation of His Grace Maxim Bishop of Western America. In his vision of the celebration of this jubilee year, when the Serbian Orthodox Church is marking the 800th year of its Autocephaly (1219 - 2019), Bishop Maxim has invited many bishops from the homeland to meet and pray with his flock at the annual Diocesan Days. This year, Diocesan Days will be held at Saint Sava’s Church in San Gabriel, California, from August 30th to September 1st, 2019. In 1219, under St. Sava then Archbishop of Zica, the Serbian Orthodox Church was granted autocephaly by the See in Constantinople, meaning that it was now self-governing as an independent authority. On August 15, 1219, during the Feast of the Dormition of the Mother of God, Saint Sava was consecrated by Patriarch Manuel I of Constantinople in Nicaea as the first Archbishop of the Autocephalous (Independent) Serbian Church.

Upon completion of the Divine Liturgy, His Eminence Archbishop Kyrill warmly congratulated his guests with the great feast of the Dormition of the Most Holy Theotokos and recalling the fraternal love between the Serbian and Russian peoples, and he shared proof of this lasting love with the following account: “Your Graces, Archpastors of the Serbian Church, our dear brother Slavs! It is with joy that I greet you this day, with fraternal love. For a Russian, it is always endearing to be together with those who share the same thought, the same desire. The Russian people, just like the Serbian people, have suffered greatly in the 20th Century, but also right up to this day. We have helped one another. When World War I began, it became a great tribulation for all of civilization, a war that turned on end the normal way of life, the rational life of men, especially Orthodox. It was then that the Serbs were struck a blow from the enemy of that war, and Russia fraternally came to the aid, to help her brothers. Later the Serbs returned the gratitude, displaying gratitude to the Russian people after the Russian Revolution when many Russians ended up in Yugoslavia. There King Alexander organized a cadet school for the White Church. It became a gathering place under the protection of the Serbian King. There is an interesting moment in the history of the Russian people that is connected with King Alexander. It was Pascha. Was it in the 1920s or 1930s? I don’t recall at the moment. As was customary, according to his tradition, King Alexander would visit Serbian parishes on Pascha night. However, he arrived at a Russian church as the place of his first visit that Pascha in order to exclaim “Christ is Risen” to the Russian people. Later, he was asked by the Serbs: “Your Royal Highness, why did you go to the Russians first, and not to your own, the Serbs?” King Alexander replied: “I came to them, because they do not have a father.” Truly,… we had lost our father. And King Alexander considered himself to be the father of the Serbian people and the Russians. … Well, holy Masters, it was with joy that I served (this Liturgy) with you. I ask your pardon for any mistakes. After all the Serbian rubrics and the Russian rubrics do not always coincide. We have just shared the Divine Mysteries. Let us now share the table downstairs. We will break bread together. Thank you very much for your presence here.”

In response, Bishop Theodosije expressed his profound gratitude to pray with Archbishop Kyrill and the assembled clergy on the Feast of the Dormition of the Mother of God and before the honorable relics of St. John of Shanghai and San Francisco the Wonderworker. He mentioned that he had been invited to California by his Grace Bishop Maxim to mark the 800th Anniversary of the Autocephaly of the Serbian Church, and he asked Vladyka Kyrill for his holy prayers.