EPISTLE of Metropolitan Hilarion, First Hierarch of the Russian Orthodox Church Outside of Russia, on the 100th Anniversary of the Martyrdom of the Righteous Royal Passion-Bearers 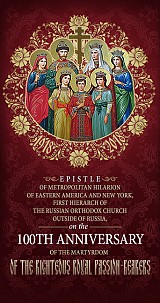 The 20th century was a difficult time for Orthodox Christians on the territory of the Russian Empire, which became the USSR after the Great War, the October Revolution and Civil War. But the more the Church endured persecution, the brighter the lanterns of faith and piety shone in the Russian land. From the Tsar and the members of the Royal Family close to him in spirit, from archpastors and simple monastics, priests, deacons to laypersons came forth a powerful spiritual army of the Church Militant. By 1918, the Russian Church showed two sorts of podvig—that of martyrdom and that of confession. Thank God, today we see how the blood of many millions of the host of Martyrs and Confessors who turned the Russian land red became the seeds of salvation for the spiritual rebirth of our people, in the Fatherland and in the diaspora.

Over my years of service to the Church, I have met various people in Europe, North and South America, Australia and New Zealand, who have emulated Archimandrite Nicholas (Gibbes), once the English tutor of Tsarevich Alexei Nikolaevich. Witnessing the profound piety of the Royal Family, their lofty nobility and examples of spirituality, he gradually immersed himself in Orthodox Christianity. When World War I began, he bore witness to the ideals of charity and empathy of the Royal Family towards soldiers and their neighbors. After the Revolution, the overthrow and unprecedented mockery of the Emperor and the Royal Family, he, a foreigner, accompanied them to Tobolsk, but was not allowed to continue with them to Ekaterinburg. In 1934, in the distant city of Harbin, China, Alexei Gibbes was tonsured to the monkhood by the hands of the missionary Archbishop Nestor (Anisimov) of Kamchatka and given the name Nicholas in honor of St Nicholas the Wonderworker and in memory of the Tsar-Martyr.

Today, many Americans, Germans, Frenchmen, Australians and citizens of other nations are approaching the sanctified threshold of the Church of Christ, as did Archimandrite Nicholas in his day, after learning of the wondrous example of faith, patience, humility and endurance of suffering without grumbling by Tsar-Martyr Nicholas and his August Family, comparing their lives with those of the martyrs of the ancient Church. Thank God, even among our own people, many have been inspired by the manner in which the pious Royal Passion-Bearers calmly faced imprisonment, exile, suffering and death.

One cannot help but remember the struggle of other martyrs who accepted suffering for Christ 100 years ago: St Vladimir, Metropolitan of Kiev, whose uncorrupt hand with a gesture of blessing continued to bless his murderers, and all of us who pray to him; St Andronik, Archbishop of Perm, a one-time aide to St Nicholas of Japan, Equal-to-the-Apostles, and student of the founder of the Russian Church Abroad Metropolitan Anthony (Khrapovitsky); St Vasily, Archbishop of Chernigov, sent to Perm to head a commission of the All-Russian Pomestny Council to investigate the murder of Archbishop Andronik and earning in that city the martyr’s crown along with other members of the delegation. At almost the same time, the Bolsheviks killed St Varlaam, Archimandrite and Abbot of Belogorsky Monastery of Perm Diocese, who enjoyed the special attention and good will of Grand Duchess Elizaveta Feodorovna and St John of Kronstadt. By Divine mercy, Hegumen Seraphim (Kuznetsov), former head of a skete in Perm, along with several other of his monastic brethren, was delivered from arrest and execution. Fr Seraphim expended great effort in transferring the relics of the Martyrs of Alapaevsk: first the princely martyrs to Peking, then St Elizabeth and Nun Barbara to the Holy Land, where he found then a final resting place himself.

The Holy New Martyrs and Confessors of the Russian Church are our hope for Divine mercy. These were our ancestors, the roots which nourish us with God’s grace: without our prayerful bond with them, without preserving their memory and our active striving and emulation in our lives of their faith and patience, we have no future. That is why we should study this richest of histories, let us lovingly learn of the lives, suffering and legacy of the Holy New Martyrs and Confessors, and commune with them in prayer, as we hear in the kontakion of the feast: “that we also, whenever the hour of trial finds us, may receive the gift of courage from God.” Amen.

With love in the Lord,
+HILARION,
Metropolitan of Eastern America and New York,
First Hierarch of the Russian Orthodox Church Outside of Russia.