Exhibit Marking the 65th Anniversary of Life on Tubabao 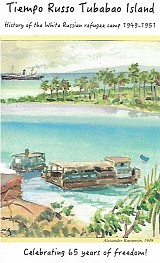 To mark the 65th anniversary of the departure of the last Russian refugees from Tubabao, an exhibition opening in honour of the milestone was held at the Philippine Consulate in San Francisco.  The opening of the exhibition "Tiempo Russo Tubabao Island" was hosted by the Hon. and Mme. Henry S. Bensurto, Jr. - Consul General of the Philippine Republic together with Hon. and Mme. Sergei V. Petrov - Consul General of the Russian Federation and their respective staffs.

Honoured guests at the event were the direct descendant of Philippine President E. Quirino, grandson Elpidio Quirino, and, the descendants of the President of the Russian Emigrants’ Association Col. G. K. Bologoff: grandson Gregory Bologoff and granddaughter Cheryl Bologoff-Holmes and daughter-in-law of Col. G.K. Bologoff Bonnie Bologoff. President Quirino and Col. Bologoff were instrumental in establishing and organizing the refugee camp in Tubabao that rescued over 6,000 White Russians in the turbulent revolutionary years in China. In addition, attendees included: His Grace Bishop Theodosy - Vicar of the Western American Diocese, Mr. O. Zhiganov - U.S. representative of Rossotrudnichestvo and Director of the Russian Culture Center in Washington, D.C., Mr. M. Davis - representative of the U.S. Department of State, Mrs. I. Cerelli - granddaughter of the artist A. Karamzin (who with his paintings documented in colour life in the camp) and a good number of the Russian Tubabao refugees.  Approximately one hundred people attended the event opening and the reception that followed. The evening's event was thoroughly covered by Russian and Philippine major media networks.

The Hon. Mr. H.S. Bensurto, Jr. in his opening remarks noted, that following the atrocities of World War II, experienced by the Filipino peoples, that compassion for others could still exist is an example for all of us in these modern chaotic times. The Hon. Mr. S.V. Petrov, in his address, thanked the White Russian émigré community, who was forced to flee Russia, for preserving the pre-revolutionary language, culture and historical heritage under harsh and dire circumstances. Mrs. N. G. Sabelnik - President of the Congress of Russian Americans and Chair of Russian Compatriots Association, organized the event (herself a Tubabao refugee), and in her opening remarks noted the miraculous intercession of St. John of Shanghai and San Francisco, who lived and worked in the camp, during those years in Tubabao. Following the introductory remarks, a short programme highlighting Philippine and Russian cultures was presented to the great delight of the guests in attendance.

The exhibition itself includes personal items, art (paintings done by A. Karamzin) and photographs documenting almost every aspect of life in the refugee camp from 1949-51. The exhibition will be open to the public Monday-Friday 9am-5pm through 11 November 2016 in the Kalayaan Hall, Philippine Center (447 Sutter St., San Francisco).  After November the 11th the exhibition will move onto Washington, D.C., Houston, Minneapolis, New York and Los Angeles. 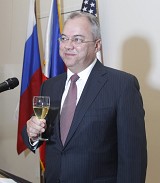