Paschal Epistle of Hilarion, Metropolitan of Eastern America and New York, First-Hierarch of the Russian Orthodox Church Outside of Russia 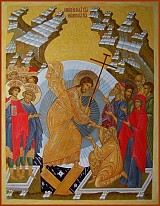 Every year, we are filled with spiritual joy and ecstasy when we hear these words and reverently participate in the exalted solemnity of the paschal divine services, which remind us of Christ’s glorious victory over sin, evil and death, for we celebrate “the demise of death, the destruction of hades, the beginning of a new and everlasting life” (from the Paschal Canon). His Beatitude, Metropolitan Anthony (Khrapovitsky), who passed into eternity 80 years ago, penetratingly observed that every feast is a sacrament. And Pascha is the feast of feasts and triumph of triumphs. The gracious power of this mystical celebration fills with joy, comforts, strengthens for the bearing of life’s cross, restores one’s inner powers, and imbues one with the spiritual vigilance and undaunted courage to endure all the sorrows and sufferings that beset us in this life.

The light of Pascha dispels the darkness of doubts and confirms us in faith, as it once did the apostles and other eyewitnesses, who, after the Resurrection of Christ, became ardent and fearless proclaimers of this truth, suffering all manner of persecutions and tortures for it. Ever since, no matter how much persecutors and false teachers, enraged by the successes of Christianity, intensify their efforts to suppress the Holy Church, it always emerges from this conflict victorious and glorious. Thus it has stood unshaken for two millennia, in the full glory of its Orthodoxy. How many societies and human institutions have disappeared during this period of time; how many kingdoms and governments have been crushed! Only the Orthodox Christian Church has passed unscathed through the passage of centuries, remaining eternally young and ageless.

As the apostle writes, Christ Himself, Who arose on the third day, is the Head and Cornerstone of the Church (Eph. 2: 20), Who has promised to remain with her (Mt. 28:20) and Who has given to her as a legacy the eternal preservation of grace and truth (Jn. 1:17). During terrible times of immorality and the domination of unbelief and heresies, the Orthodox never allowed their spirits to fall, but "remember[ed] that Jesus Christ of the seed of David was raised from the dead" (II Tim. 2: 8), and were even more inspired to earnestness in the service of God and man within the Church. Thus, dear brethren and sisters, even in today’s complex era of little faith, false teachings and moral depravity, we must not lose either hope or confidence that there are no waves of evil that are capable of drowning the divinely planted garden of the Orthodox Church. Christ, Who rose from the dead, the Founder of the Church, Who preserves us sinners, "shall not slumber nor shall He sleep" (Ps. 120: 4) in His salvific providential care for the Church. His grace and truth, which lead us to eternal unity with God, will never be lacking in this spiritual treasury. For this reason, following the good example of our predecessors, we place our trust in the Saviour of all men, mindful that "the truth of the Lord abideth forever" (Ps. 116: 2), and that "there is no power that is able to vanquish the Lord; there is no authority that is able to prevent the Lord from carrying out His will", as wrote the holy hierarch John (Maximovitch), the fiftieth anniversary of whose repose we prayerfully mark this year.

With all my heart I greet each and every one of you at the all-radiant festival of Holy Pascha; and it is my prayerful desire that the risen Lord will grant you strong faith, health of soul and body, all prosperity, and help from heaven. May the Lord illumine with the light of His Resurrection the souls of the children of His Church, for the joy of the sorrowful and the oppressed, and the conversion and enlightenment of those who are “alienated from the life of God” (Eph. 4: 18), among whom we live and carry out our service. May we be preserved under the protection of the “Kursk-Root” Mother of God, who has taken the Orthodox people in the diaspora into her keeping.

With paschal joy and love in the risen Christ,
+HILARION,
Metropolitan of Eastern America & New York,
First-Hierarch of the Russian Orthodox Church Outside of Russia.