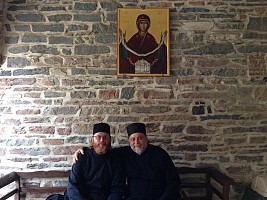 A providential meeting in the Vatopedi Monastery on Mount Athos in July of 2014 by Archpriest Alexei Yastrebov. First published on the author's Facebook page on October 3, 2015.

I had heard of Father Nicholai previously from my friend, Father Alexander Ageikin. They were friends, both served the Church as deacons of cathedrals: a work that appears to some as attractive and not very complicated, but in fact is a difficult labor demanding knowledge not only in the realm of liturgical practice, but often including administrative and household skills, huge physical endurance and the “usual” Christian humility.

We had the opportunity to become acquainted in 2010 in Moscow, and I immediately found him to bean easy going and radiant person. At that time, Father Nicholai suggested that I visit San Francisco, where he served in the Cathedral of the Icon of the Mother of God “Joy of All of Sorrow.” But I assumed this was as the saying goes  “If we see you in Kolym…”  Therefore I answered something sincere along the lines of  “no, better for you to visit us. ” Moreover, since there is no shortage of pilgrims to Venice, to see one another in our area would be completely natural.

My real and final meeting with Father Nicholai took place in 2014 on Athos. Our paths crossed at the Vatopedi Monastery. He was in the company of his son Terence and Archpriest Paul Volmensky from Sacramento. As usual, I was by myself. I have never traveled on Athos with someone else, in a group. The first time this happened by accident and from then on, it is my preference. Simply put, dealings with travel companions on the Holy Mountain, even the most positive and informative (even with the “experienced”), are often distracting. One desires to focus on one’s thoughts and on interactions with those with whom it would otherwise be impossible to meet. Therefore, no matter how pleased I was to meet fellow countrymen of distant San Francisco, I nonetheless thought that I would stick to my usual routine alone: from Divine Service to the meal, to the Divine Service, to sleep, to hiking nearby, to Divine Services, etc., while greeting here and there the fathers from America. I do not recall if it was during our first conversation (after the meal and the veneration of the relics) or on the next day, Father Nicholai casually explaining his visit to Athos (this was his first visit in 2014. He visited a second time not long ago, about a month back) asked me if I knew about his illness. He explained that the Western American Diocese of the Russian Orthodox Church Outside of Russia is praying collectively for his health. It was announced on the official website and therefore he thought that it was possible I had learned about it. However, I knew nothing about it, and his words came as a shock to me. He informed me that the stage of his illness was terminal; he went on to say that the tumor was inoperable and the doctors had given up.

Every trip to Athos has a special meeting that “makes” the time there significant, and becomes the main focus, even though there are many important moments. After all, God speaks to people through people (a good Greek phrase – “fellow man,” συνάνθρωπος). Understandably, your most significant occurrence, other than the personal experience of prayer, can be a connection with a person you have never met before, though it is not necessary that you have never met him. Something new needed for your spiritual life, some hint, some additional morsel is given now and again through someone well-known to you, and it is simply that the meeting-place for such answers is the Holy Mountain. But for each of us it happens slightly differently, of course. This time I visited several places, some of which are associated with the Russian tradition, listened to wise people and venerated both new holy places and those I had known from before (the millennium-old stronghold of Vatopedi; the unforgettable impression of the Russian Saint Elias Skete; a soulful blessing from the guest master Father Philimon “a good paradise!” [καλό παράδεισο!] which is most likely to be heard only on Athos; the Skete of Ksilugru with its first Russian church in the world; the Skete of St. Sabas with the century old Father Simeon). However, by far the most significant meeting was my acquaintance with Father Nicholai. I say acquaintance even though we were familiar with each other from before. My usual desire to “run” from company was not present. In its place was a revelation of true grandeur, an actual victory of consciousness over existence, an overcoming of human infirmity and fear; and all of this not with gritted teeth, which would be understandable and noteworthy. I was the witness of the following of God’s will, and its acceptance in every event. Simultaneously, I gave myself an account of how terrifying it was to be faced with such a diagnosis at his age, during the period of a man’s life when normally he is in blooming health, is surrounded by family, is occupied with his favorite work. In spite of Father Nicholai’s personal hardship, it is the radiant expression on his face, which stands before my eyes. Of course, it is obvious that a man who comes to the Holy Mountain for the first time, if he didn’t come by accident, would be beaming in any event. Anyone who has even been there would admit to it. But this was something completely different, and I looked upon him and was amazed. Then I became even more amazed. The unaffected story of his roots (Father Nicholai came from the Cossack/Harbin emigration that after many trials in China, moved to Australia and the USA), of his family, of events in his life, revealed a man of simplicity and humility of the highest degree. Later, his tale turned to today’s situation, to his illness. He told how he “worked it out” with his employer so that they would not retire him to die, but would keep him on disability for a while, so in this way provide a little longer for his family. He spoke very passionately. It was clear to me that this problem was concerning him. He was happy when he mentioned that at work they were helping him to do this. It was as if he spoke of himself in the past tense, as if he was looking at the situation from the outside and was only worried that his family would not suffer a loss. Father Nicholai spoke with the Abbot of the monastery, Father Ephraim, and after that conversation it was obvious how happy he was., although at first he was shy about approaching and I requested the translator and secretary, Hierodeacon Theodoch, that the Elder would pay him a little time and give his blessing. On the next day (July 24, 2014), we took a boat ride to the Monastery of Pantokrator; the day after that, we went by foot to the Cell of St. Sava and spoke about everything and didn’t want to leave.

After our Athonite “acquaintance” and my return to Venice, I would follow on Facebook the travels of Father Nicholas across Russia, which was his destination after Greece. Most importantly, I noticed that Father Nicholai would participate in the Divine Services, apparently every time the opportunity arose, though by this time he moved around with physical difficulty. A triumphant and radiant expression did not leave his face on every photograph from Russia.

Archpriest Alexei Yastrebov is the Rector of Holy Myrrh-bearing Women Church, Venice, Italy. He is a graduate of the St. Tikhon’s Institute in Moscow, Russia, and is fluent in Italian and Greek.

Translated by Reverend Paul Volmensky. This account has been abridged.