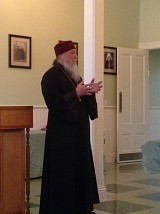 On March 9, 2015, the clergy of the Western American Diocese of the Russian Orthodox Church Outside of Russia gathered under the omophorion of their archpastor and father, His Eminence Archbishop Kyrill, for the first of a three-day clergy retreat.

Approximately 18 priests and deacons of our diocese gathered with Archbishop Kyrill and Bishop Theodosy, at the Old Holy Virgin Cathedral, this hollowed, majestic house of worship with its recently renovated hall. This is an old church seeped in prayer, where generations of Orthodox have poured out their hearts in prayer, supplication and thanksgiving.

A molebin “Before the Beginning of Every Good” was performed on schedule at 1:00 pm and then followed a welcoming word from our Ruling Bishop. His Eminence Archbishop Kyrill was pleased with the topics for discussion scheduled for the current conference: 1) “The Pastor in the Last Days” and 2) Homosexuality: Pastoral Challenges & Responses.” His Eminence finds these two topics related. Simply put, forty years ago the authority of Sacred Scripture was accepted as an impeachable and unquestioning standard. However, today we are faced with an entirely different social clime, and while neither ignoring nor rejecting the Sacred Writings of the Holy Bible, we pastors are facing a crucial need to find additional means to support the ageless message of the Orthodox Church today, both doctrinally and pastorally.

Archpriest David Moser delivered the lecture: “The Pastor in the Last Days.” He said there is much hype about today being the End Times and he did not want to appear cliché or alarmist.  In actuality the Church has been living in the Last Days since the Ascension of our Lord.  We are closer to the end than ever before and therefore we can expect the inevitability of facing that which has been spoken of by the Prophets and Fathers concerning the end of the world and the Second Coming of Christ. Father David offered a thorough lecture that was divided into three parts: 1) the indications of the last times based on the Tradition of the Church, 2) the characteristics of the people of the last times, including us Orthodox & 3) the pastoral response to the crisis of the End Times; how to minister to the people of God and anyone willing to listen.

In his third section on the pastoral response to the crisis at hand Father David offered more than ten points for the Orthodox pastor to focus upon. The material was extensive and deserves an in-depth examination. Here are only some brief pointers. Heartfelt prayer and repentance are in order. Our Lord said: “Daughters of Jerusalem, weep not for me, but weep for yourselves, and for your children. For, behold, the days are coming, in the which they shall say, Blessed are the barren, and the wombs that never bare, and the paps which never gave suck. Then shall they begin to say to the mountains, Fall on us; and to the hills, Cover us” (Luke 23: 27-30).

A few examples of Father David’s pointers to help face today’s trials and the trials yet to come are 1) to limit exposure to the bad and increase one’s contact with things that are good and positive. This will be an aid in the proper formation of the soul, 2) to live in the world, but not be of the spirit of this world with its humanistic and pleasure-loving approach to life which leaves no room for God’s guiding providence and the higher reality of the blessing of Eternal Life, 3) to forgive one another, 4) to cultivate a constant remembrance of death, which overcomes the fear of death, 5) to protect and nurture the institution of marriage and the raising of children, 6) to reverently and worthily participate in the Sacraments of the Church.

After the lecture time was devoted to questions and comments.  From there the fathers went to the cathedral to serve the office of Great Compline and Matins and then our archpastors lead the clergy and faithful in prayer for the ever-memorable Metropolitan Laurus, who reposed on the Sunday of Orthodoxy on March 16, 2008. 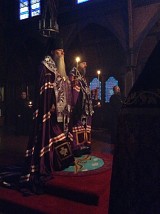