Matushka Vera Dombrovsky reposed in the Lord on February 16, 2015 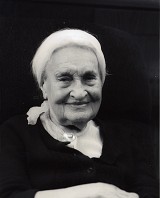 The 16 of February, 2015, Matushka Vera Dombrovsky reposed in the Lord in Novo-Diveevo, NY.  Born in 1918, newly-departed Matushka Vera was married to Archpriest Nikolai Dombovsky. Father Nikolai, who reposed in the Lord in 1979, served as a priest in Poland, Chili, Cuba and San Francisco, CA.  Both Father Nikolai and Matushka Vera were very energetic in the building of the New Cathedral of the Mother of God “Joy of All Who Sorrow” on Geary Blvd. in San Francisco.  Simultaneously, Father Nicholas labored in the formation of youth, being an active member of the Saints Cyril and Methodius Gymnasia at the New Cathedral. He also compiled an in-depth, historical jubilee album for the Cathedral community when it celebrated its 50th Anniversary. Newly-departed Matushka Vera reposed on the day of commemoration of St. Simeon the God-receiver (February 3/16), who lived into deep old age and having received the Christ-Infant up in his arms exclaimed: “Now lettest Thou Thy servant depart in peace, O Master, according to Thy Word, for my eyes have seen Thy Salvation…” Matushka Vera herself lived to the deep age of 97. For all of her holy labors in service to the Holy Church may her eyes also see the Salvation of the Lord. Memory Eternal to her bright soul!

Funeral Services for newly-departed Matushka Vera are scheduled to be performed at the New Cathedral as follows:
Friday February 20: Panykhida at 7:30 pm.
Saturday February 21: Funeral at 10:00 am with burial on the Serbian Cemetery.

The family of the newly-departed (on behalf of her daughter) request that instead of flowers for the coffin, to please consider a donation for a worthy cause: the Sisterhood of the New Cathedral, where Matushka Vera labored for many years, to Novo-Diveevo, where she lived for the last 5 years of her life or to RACS (Russian American Community Services) which assisted with many of her needs during the final years of her life in San Francisco.

Below is an interview taken of Matushka Vera Dombrovsky by ROCOR Studies (in Russian).
Share This:
News Updates
Announcements
00000