On the Feast of the Nativity of the Lord Jesus Christ, His Eminence Archbishop Kyrill ordained monk Peter (Karakozoff) to the rank of Hierodeacon.

Hierodeacon Peter has been known as a faithful assistant to His Eminence since 2003, and adminstrator of the diocesan chancellery for many years. Recently, Father Peter was tonusured a monk on Saint Herman's Day, December 12/25, 2014. He will be conducting his obedience within the boarders of the Western American Diocese. May God grant him zeal and holy might in his service in the Vineyard of Christ.

Photographs of the Ordination 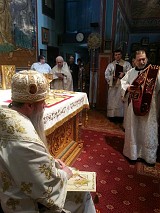